“Understanding Climate Change Awareness Through the Prism of Brazil” Joshua Fouts, Executive Director of Science House Foundation orchestrates a two-part collaborative gathering first in Rio Branco, the Capital of Acre in the westernmost state of the Amazon region and secondly in Brasilia the capital of Brazil, to engage with a cross-section of scientists, artists, innovators, and policymakers. The conversations about climate change will be documented with audio and video journals by a documentary filmmaker. The insight gained will inspire transformation in Science House’s Planet CheckUp program, which provides environmental testing kits to students, into a globally-influenced program about empowering, educating and informing young people world-wide about how to understand and participate meaningfully in Climate Change dialog.
View Archive Science House Foundation/Tribal Changes Blog
New Blog Site for Tribal Changes App

The Climate of Change: The Art and Process of Understanding Climate Change by Creating an Educational iPhone App - By Joshua Fouts and Erica Paiva 2012 "Seeding Possibilities" Grant

SCIENCE, CULTURE and the PRINCIPLES OF NATURE

Among the principles of our work in the development of our "Seeding Possibilities" educational app is a desire to enhance interest and understanding of scientific research to increase youth interest in and enthusiasm for the study of science.
» Read More

The Climate of Change by Joshua Fouts

The Climate of Change: The Art and Process of Understanding Climate Change by Creating an Educational iPhone App

When Maggie Kaplan (the Founder and Executive Director of Invoking the Pause) and I discussed the possibility that I create an app about Climate Change for my ITP "Seeding Possibilities" second grant, I saw an opportunity for synergy -- synergy between the community I lived with during my Pause and the opportunity to express and explore the impact of Climate Change in a novel way using an iPhone or iPad as a platform.  We were thrilled to be given the opportunity to develop this project.

Science, Imagination and the Art of Adaption: Understanding Climate Change Awareness Through the Prism of Brazil - Joshua Fouts, Executive Director, Science House Foundation - In their "Pause", Joshua Fouts and his team traveled to the heart of the Amazon jungle to deliver microscopes to the "legacy communities" of the indigenous Ashaninka People, to teach them about science education and to help them learn to evaluate the impacts of climate change in their environment.

As a result of that successful Amazon expedition, now awarded with a "Seeding Possibilities" grant, Joshua and Science House Foundation are collaborating with a team of Brazilian anthropologists and game designers at the University of Sao Paulo on the creation of an Iphone/IPad app game that informs players about the culture of another "legacy community" of indigenous ethnic Brazilian people known as the Kaxinawa, who live in the state of Acre, Brazil. The purpose of the game will be to convey the importance of indigenous knowledge and demonstrate the relationship between man and the environment from the standpoint of indigenous peoples, with an emphasis on explaining the impact of climate change on these "legacy communities".

Science House Foundation in Brazil - 2012 Summary
We are p

His 2012 grant: Science, Imagination and the Art of Adaption: Understanding Climate Change Awareness Through the Prism of Brazil is featured.  Also mentioned is his new ITP "Seeding Possibilities" grant to develop an iPhone/iPad app game about climate change and indigenous culture in the Amazon.

The Latest Dirt on Science House Foundation by Joshua Fouts 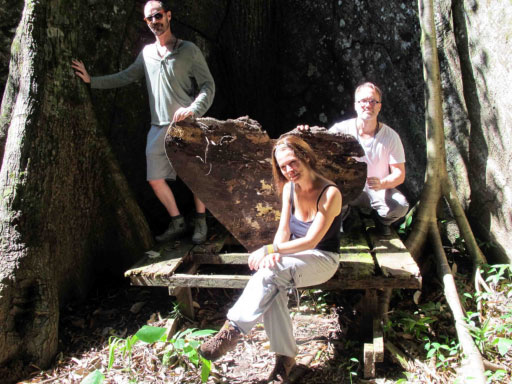 "Lots of things have changed since I was a child," Erishi a 15-year-old pregnant daughter of one of the Ashaninka leaders told us in Portuguese when we asked her if she had noticed any changes in the climate in her area.  "When I was a child I never used to get sunburned.  Now I do.   I used to be able to dive into the river, now it's too shallow..."  Erishi, who has a quiet, thoughtful, demeanor, with wise eyes, rosy cheeks and a kind smile calmly described the changes to the climate she has seen in her corner of the Amazon jungle where her community subsists entirely off resources they grow, hunt and fish in the jungle.  I was amazed that she could recall such dramatic changes at her young age.  » Read More