ITP Grant Partners Heidi Quante and Alicia Escott of the Bureau of Linquistical Reality just recently returned from the COP21 in Paris.  Read about their "Pause" experience:

“When I walked into the Bureau of Linguistical Reality Field Study Office it hit me. . .I didn’t realize that other people are having the same feelings as I’m having around climate change. It hit me that like many things, I had viewed language as fixed. . .but the Bureau opened my eyes that everything, including our language, is not fixed. . .participating in the Bureau salon was a shift for me.”

The Bureau of Linguistical Reality’s Pause in Paris during COP21

We took our "Pause" in Paris during a unique time in history, the 21st United Nations Climate Change Conference, also known as COP21.  Our vision was to create "pauses" for the thousands of diverse people from around the world who gathered in Paris for these international climate negotiations. Via our interactive artwork, The Bureau of Linguistical Reality, we sought to create a unique space for people to take a breath, pause and contemplate the role of culture in engaging others in the global climate change movement. We went to Paris not knowing how the world would respond to our pauses since prior to Paris, we had been facilitating these in the United States primarily with English and Spanish speaking audiences.  We were blown away by the global response to The Bureau of Linguistical Reality and our “pop up field study office” curated pauses.  Below are just a few of the responses and findings from our amazing 3 weeks in Paris, made possible due to the generous support of Invoking the Pause.

Background on The Bureau of Linguistical Reality

As was noted above, we created these cultural pauses via The Bureau of Linguistical Reality an artwork the artist Alicia Escott and I created.  The Bureau of Linguistical Reality can best be described as a “public participatory artwork focused on creating new language as an innovative way to better understand our rapidly changing world due to manmade climate change and other Anthropogenic events.” The vision of the artwork is to provide new words to express what people are feeling and experiencing as our world changes as climate change accelerates. We then use these new words to facilitate conversations about the greater experiences these words are seeking to express with the view to facilitate a greater cultural shift around climate change.

This project was originally inspired by moments where Alicia and I were literally were at a loss for words to describe emotions, ideas or situations we found ourselves experiencing because of climate change.

We discovered we were not alone – friends, colleagues and strangers we met were also experiencing this loss for words.

For centuries philosophers, linguists, psychologists and others have noted the power of words to influence people’s thoughts and actions. A theory called linguistic relativity (also known as the Sapir-Whorf hypothesis), holds that a language affects the ways in which its respective speakers conceptualize their world, in short their cognitive processes which often inform their actions. It is from the term, linguistic relativity, that The Bureau of Linguistical Reality takes its name.

We appreciate that not all the words generated via this creative endeavor will make it into global lexicons.  And that’s ok. Our goal is to spark deep reflections and conversations about how our cultures can better reflect our realities. To inspire a cultural shift to better tackle a world rapidly changing due to man made climate change.

“You guys really get it. . .It’s everything we’re trying to do in one project. . .the psychology, the engagement, empowering people to participate in the conversation. . . I love this project” 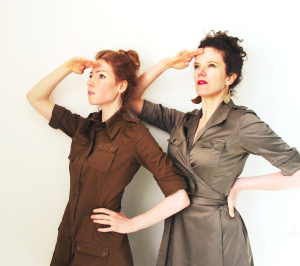 never met before, to share their feelings and experiences around climate change and other Anthropogenic related experiences for which they wish there was a word, yet no word currently exists.  Each salon was held over dinner and was curated around a specific theme for example fresh water, ocean health, psychology, science fiction, extinction and more.  Participants included artists, linguists, mothers, farmers, fisherman, psychologists, investigative journalists, restaurateurs and a diverse array of others.

In all of these salons we noticed something beautiful occurring. People who had felt isolated in their thinking around climate change were elated to realize a stranger from a completely different discipline felt the same way and was also at a loss of words to express themselves.  The conversations of connectivity, sometimes lasting 4 hours, became an essential component of our evolving artwork. In addition, the artwork provided a unique space in which there was no “expert” in the room talking at people, rather people were all equal experts sharing with one another, united by the same feelings and experiences.  These salons confirmed for us the power of the cultural pause the artwork facilitates.

Our Pause in Paris During COP21

Our "Pause" in Paris was amazing.  The diversity of humanity, languages, worldviews was exhilarating.  We sometimes found ourselves with a line of people waiting to participate in our Bureau of Linguistical Reality “Paris Field Study Office”.  We took our mobile field study office to diverse venues in Paris, quickly adapting to each environment.  For example, our first salon was held over dinner on a barge on the Seine and included notable French poets, scientists, writers, architects, artists, mothers and others. In this salon, a group of strangers all agreed that the current word for nature was woefully inadequate and needed to be updated to a word that didn’t place humans “outside” of nature but rather revealed that humans are an inextricable part of nature. This theme of needing a new word for nature permeated all our discussions while in Paris.  Please note the Bureau is still working on a more all inclusive word for “nature”.

Moving forward, we adapted our pauses to the diverse venues where we brought our field study office.  Our pop up field study office consisted of a large desk complete with the accoutrements of a bureaucratic office (office signs, name plaques, the Bureau’s seal etc…) Once Alicia and I donned our Bureau uniforms including glasses without lenses (to subtlety reveal we are a faux bureaucracy), and assumed our positions behind the desk, our artwork came to life.  Curious people would stop at our pop up field study office, intrigued by the wealth of new words created in the pauses before that adorned whatever walls our field study office happened to be surrounded by. The novelty of these words and the quirkiness of our overall field study office made people stop.  Many people who stopped also sat at the inviting chairs placed at the field study desk, paused and participated, and so began many wonderous pauses in Paris with people from all over the world.

Here are just a few of the findings from the Bureau of Linguistical Reality Field Study Offices in Paris that occurred at: the 3 day International Conference of the Youth (COY); the European Union Summit of the Creatives, also known as ARTCOP21; Place to B (the media hub exploring new ways to tell stories about climate change), and many other venues:
And many many more findings we will be revealing on The Bureau’s website in the coming months.

Our greater Pause in Paris allowed us to test and refine how to create cultural pauses for people around the world. We found our voice as cultural facilitators and for this we are eternally thankful to Invoking the Pause.  Invoking the Pause provided the support for our overall pause as well as individualized pauses, reflections and experimentations to happen and for this we are also Thankful.

A non-binding agreement was signed in Paris at the conclusion of COP21.  Even though many people working on climate change appreciate the limits of this non-binding agreement, they still appreciate it’s something.  Even more remarkable however, was the global network of humanity that connected in Paris outside of the government negotiations.  These people, many of which we had the good fortune of meeting, are passionate about forging new solutions to tackle climate change at the global scale required.  This vibrant emerging network of humanity connected by a common cause is impressive and awesome in the truest sense of the words.  We witnessed people using and integrating new approaches - culture and language included - and for this we are also thankful for our Pause that enabled us to contribute to this growing movement our own creative way.