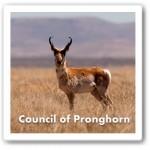 In the March 2011 issue of The Progressive Terry Tempest Williams writes a thought provoking essay about the harsh realities of the impact of the Natural Gas Industry on our country– or more specifically, Wyoming– and the people and the Pronghorn antelope who call it home.

This beautiful and important essay details the reality of living in a community surrounded by oil and gas development. The residents of Pavillion, Wyoming “were told by the EPA last summer that their drinking water was no longer safe to drink or cook with due to high levels of sodium, benzene, and methane gas, among other contaminants and petroleum compounds.”

Williams describes in prose the impact of these oil and gas developments on the collective psyche:

“The migration of the pronghorn antelope in Wyoming is not just a physical migration, but a spiritual one, a migration of our imaginations. This is the sacred territory of Art that makes life bearable in the midst of pain and loneliness.  Beauty is not optional or peripheral, but a strategy for survival.”

––Terry Tempest Williams has been called “a citizen writer,” a writer who speaks and speaks out eloquently on behalf of an ethical stance toward life. A naturalist and fierce advocate for freedom of speech, she has consistently shown us how environmental issues are social issues that ultimately become matters of justice. The Council of Pronghorn was a Pilot Program of Invoking the Pause.