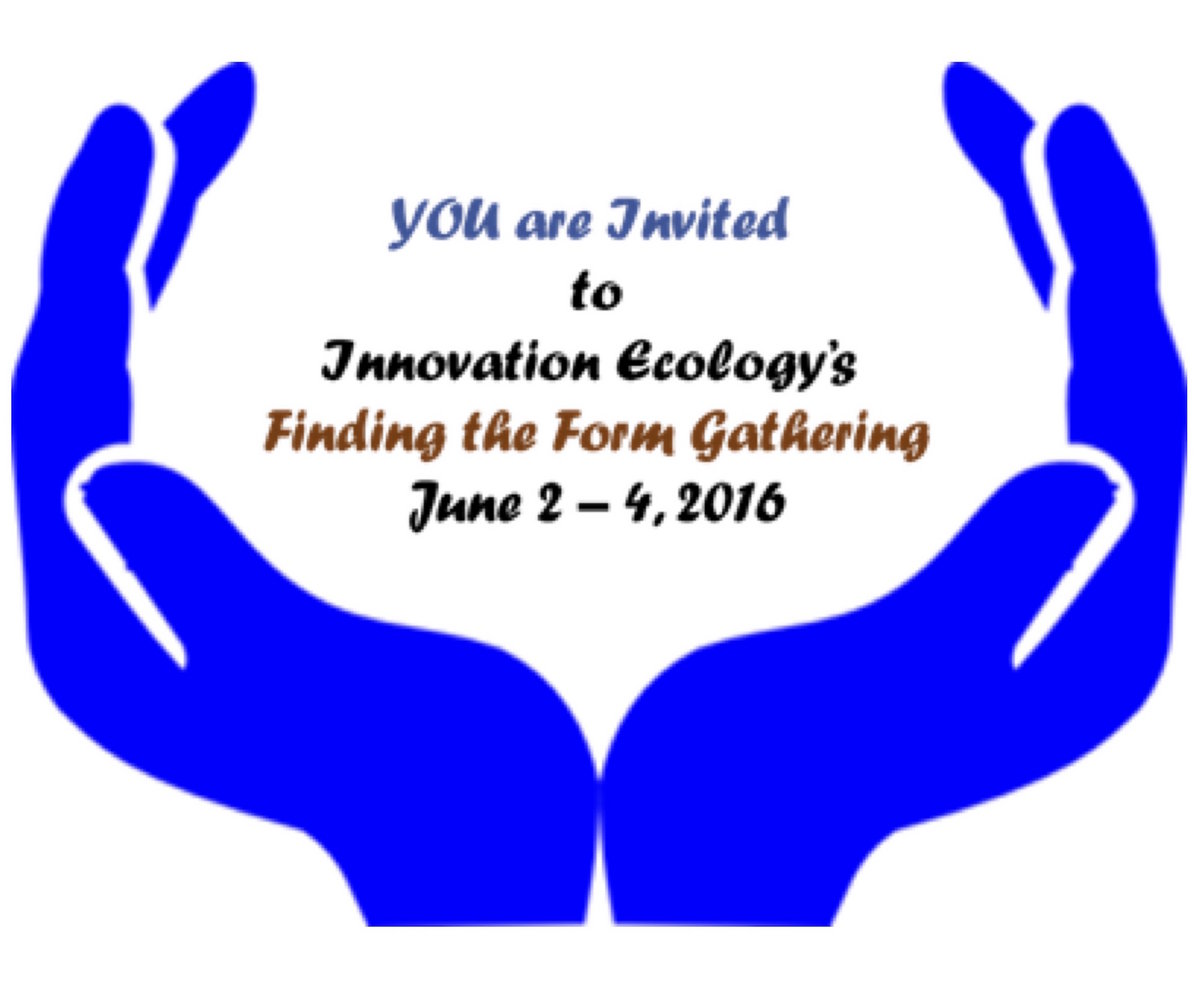 "I try not to find the form too soon. Instead I try to think about it as an idea without a shape."
Maya Lin, Boundaries. New York. 2000.

Here in the Pacific Northwest, someone seeking to pause, to reflect, might be said to be 'stepping out of the river.' Our rivers, including the mighty Columbia, have shaped and continue to shape our language and culture, as do the geographic features of so many communities around the globe. Why step out of the river? A fish in a river does not know it is in a river because the river surrounds it. Only by being out of the river can the fish see the eco-system in which the river exists, with its dynamic balance of destructive and creative forces. We sought a Pause to see Innovation Ecology's contextual system: the essential 'bridge' between the hard and soft systems that accelerates communication and learning by communities working towards resilient, low-carbon futures. Our aim was bringing our seed concept into a flowing, self-nourishing reality capable of supporting communities in the critical work they must do together to thrive.

We called it a gathering and we set it in the orchards just south of Hood River, a Columbia River Gorge town nestled between two mountains (Mt. Adams to the north and Mt. Hood to the south), at the point where the wet west blurs into the dry east. The Gorge is an incredibly diverse place, linking not only east and west sides of the Cascade Mountain range, but also urban and rural points of view, new and venerably old cultures. It holds the long memory of the land, a story told and re-told across peoples and time. 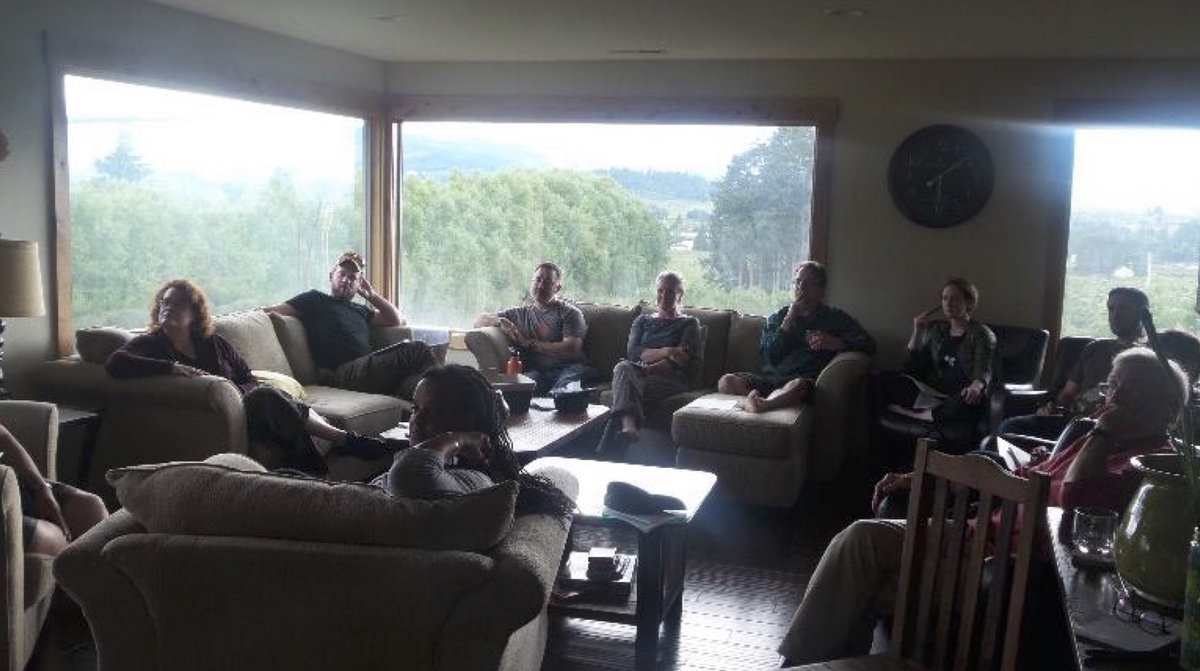 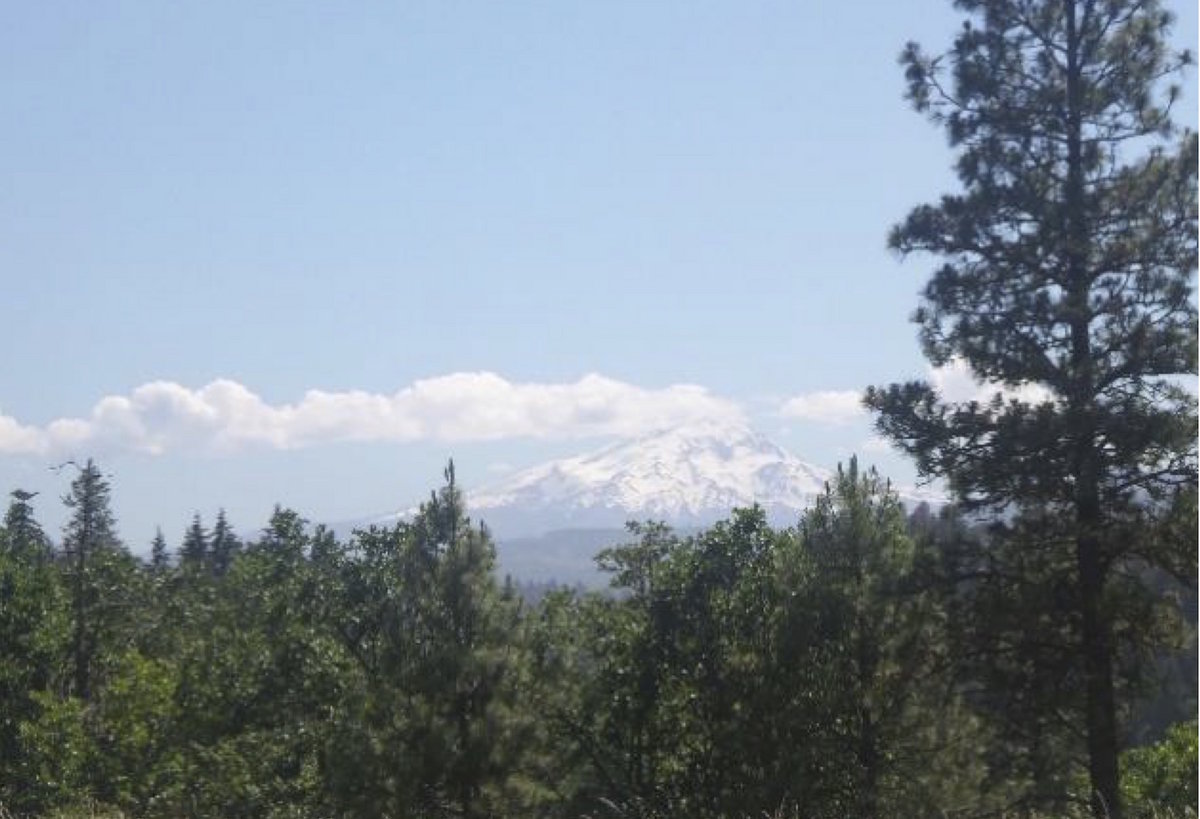 The view from the main house

Using the strategic leverage points from a clean energy systems map developed through the participation of over 30 organizations focused on clean energy in the Columbia River Basin, we looked for people in our networks that could bring us those specific perspectives. The table below captures the leverage point elements and the people attending.1

But the table does a poor job showing the richness of our gathering's participants. This is best seen on the map we made to help everyone attending get to know the others. Below is a picture of our map, although it comes to 'life' only if viewed live, which you can do by clicking here. 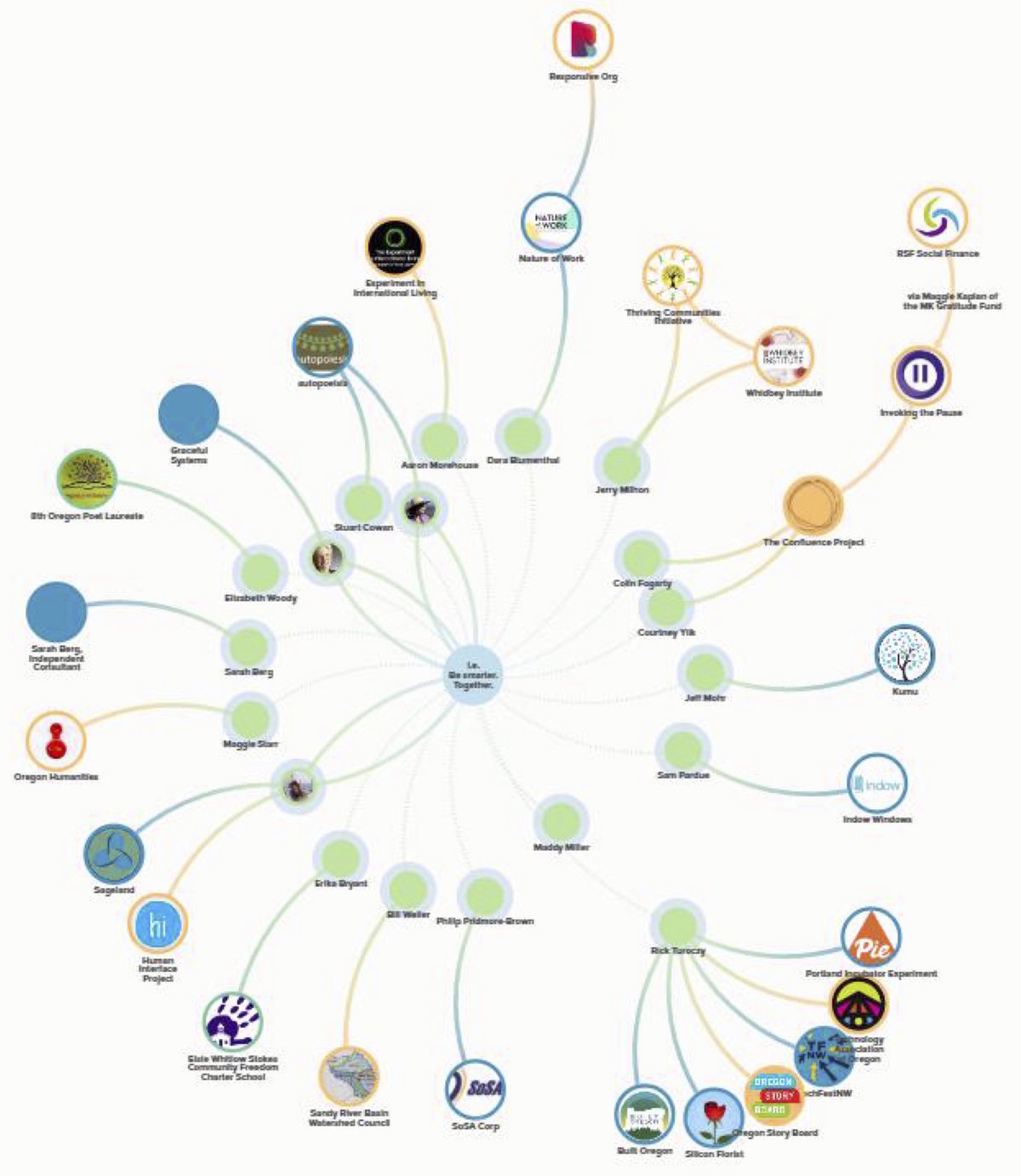 Through another version of this map, we explored the connections between our gatherers. Again, this is best viewed live, which you can do here. In 'live' mode, selecting any one or more of the "purposes" gleaned from our gatherers' websites - learning, software, social justice, story-telling, and flourishing economy - reveals who connects to that purpose. We are including a picture of the connections shown when one highlights all of the purposes: 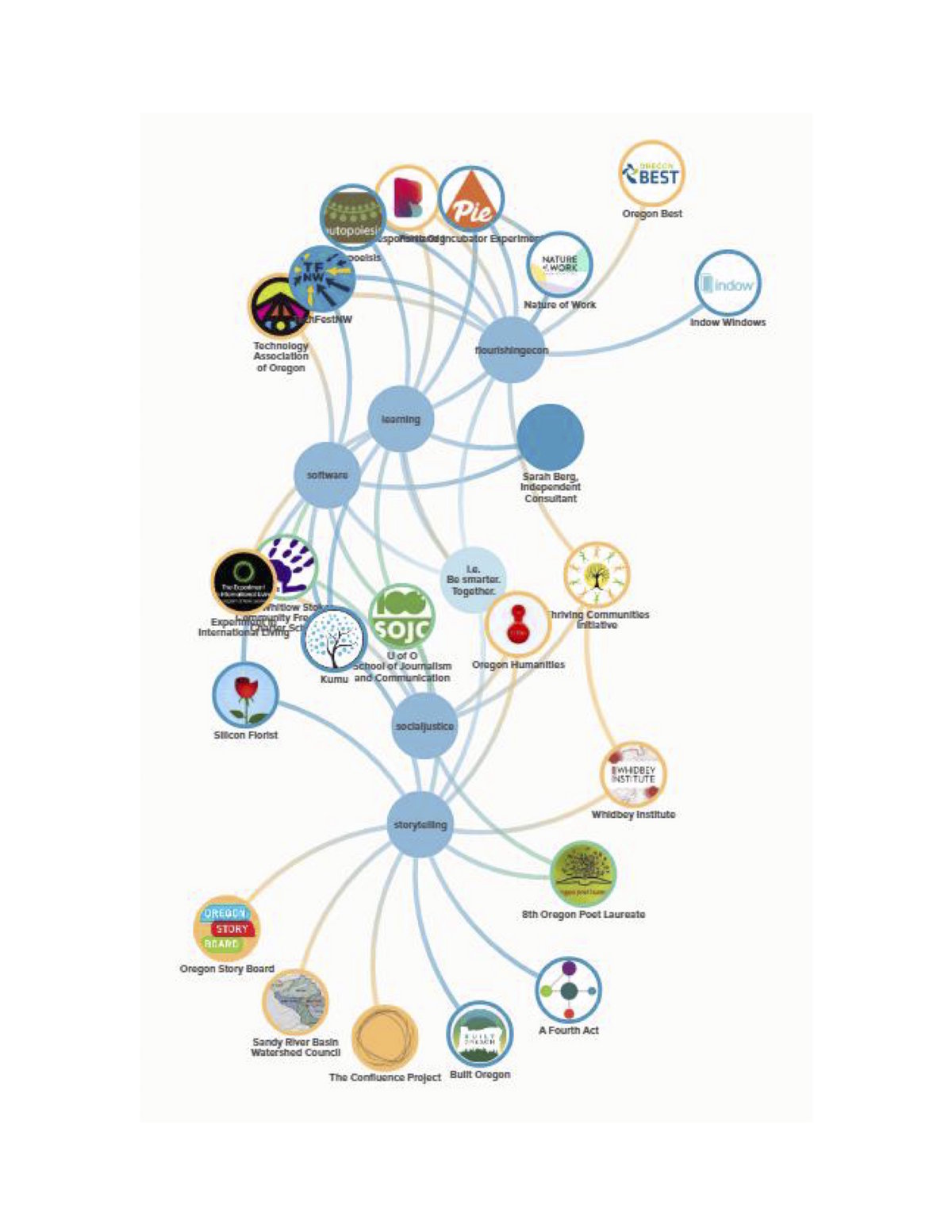 Where did we start?

We started the gathering with a hike to a uniquely meaningful spot along the Columbia River: the bird blind designed by Maya Lin and managed by the Confluence Project, our sponsor for the ITP grant. The bird blind sits at the confluence of two rivers - the Sandy and the Columbia. The Sandy River is undergoing tremendous change with the removal of an over 100-year-old dam and the confluence area itself has received much loving attention. The bird blind records the presence of wildlife at the time Lewis and Clark explored the Columbia for President Jefferson and the presence - or absence - of that life today. Its design also provides a dramatic experience in what happens to one's vision when you step back from an up-close focus on individual things (in this case, the slats of the blind). From the center of the structure, an arcing view appears of the landscape outside the blind. It is quite magical and grounded all of us in our task for the next two days: to step back and explore the 'system' in which Innovation Ecology could flourish in its mission.
Once we had all 'gathered', Elizabeth Woody - Oregon's 8th Poet Laureate - opened our gathering with one of her poems, shared here:

In crosses of elliptical loops.

An old wound in the land healed over years of corruption and charging horse soldiers. The children ran over the embankment.

Alarms were frantic pounding of hooves and rifles. In the spirits silent rising and cracking bones. The valley courses with Nee Mee Poo souls.

At times one hears music in the leaves. It is light and tinkles of shell. Rapture.

The ancestors sing despite conversion.

This is not one voice but the beginning of all voices in unison. Yes, crescendo waves of spiral utterances of the Plateau canyons. Blue herons rise.

The river returns pervasive with silver and red Nusoox.

Twanat means to follow, as in ancestral teachings, cultural lifeways

This is not one voice. Indeed. That and the other thoughts Twanat expresses so beautifully opened our gathering with just the right spirit.

What did we do?

Gathering participants joined in structured conversations, open space conversations, and causal map exploration, as well as exercises based on aikido, qigong and other reflection and movement time. Several insights emerged from engaging the group in the barriers and enablers involved with 'accelerating communities of place and practice in learning to frame questions, take resilient action, and forge collaborative innovation networks in the face of climate change.' Building on the leverage points listed above from our 2015 effort to map the system from which communities with resilient, clean energy systems might emerge (found here and explained in a presentation here), participants identified:

Supported by advance work done to map the content and concepts of the Innovation Ecology river - ARC (Agile, Resilient Communities) and KE:i (Knowledge Ecology: Interface) - attendees provided a wealth of ideas and suggestions for next steps. Significantly, potential Innovation Ecology pilot projects emerged from the gatherers. For example, one concerns water and another energy, two systems heavily entwined with the causes and the predicted ravages of climate change; both involve complexity literacy, the need for actionable data, and the tools and processes available to help communities be smarter, together. Work on pilot projects is in progress.
The agenda included a hike along a river that is regaining significant health, facilitated by Bill Weiler of the Sandy River Basin Watershed Council, whose mission is to protect and restore the natural, cultural, and historic resources of the Sandy River Basin. The restoration game Bill had us play and the experience of the hike were so rich that they deserve a separate post. Look for this soon.

How did reality intervene? 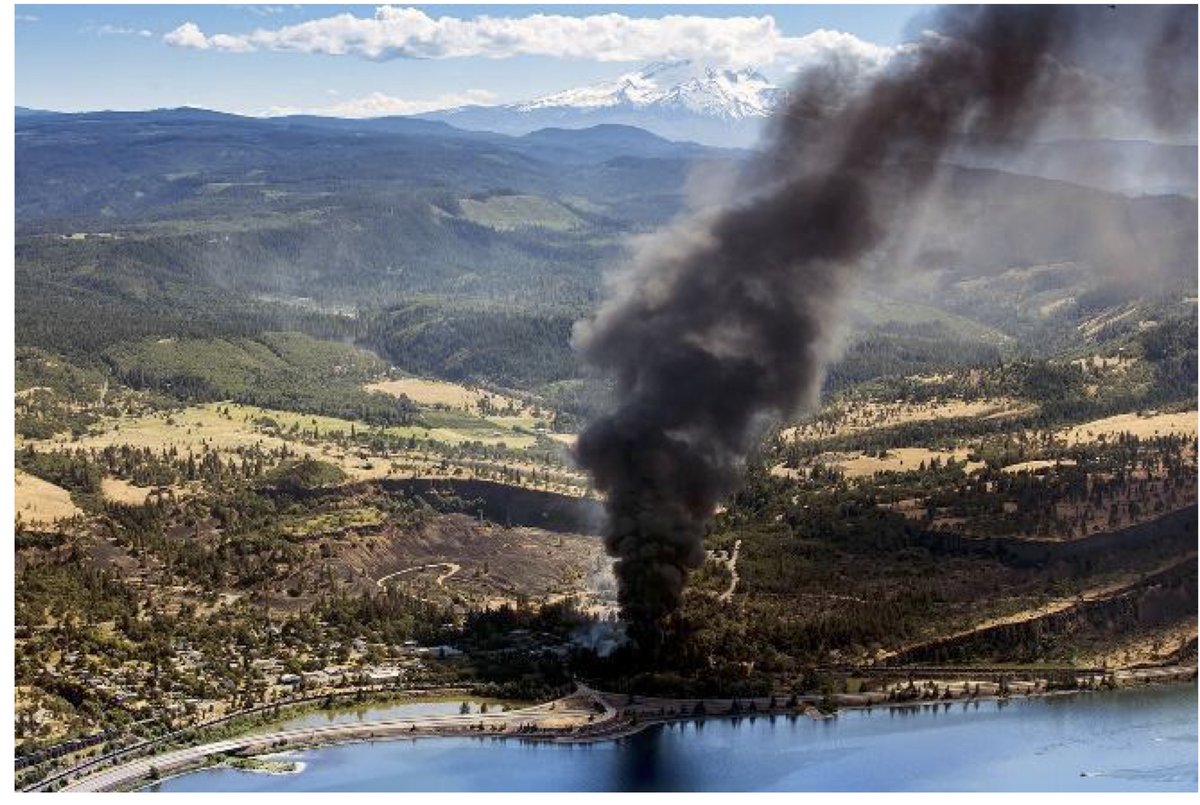 On the first full day of the gathering, an oil train exploded in the Columbia River Gorge, near Mosier, a town not far from Hood River and our gathering site. Within hours, we could smell the burning oil. By the next morning, the smell and sight of oil in the air was so strong, several of our gatherers felt ill. We all felt 'ill' that the accident many had predicted would happen in the Gorge finally did. One person planning to attend could not come because of the travel issues the crash caused.

Fortunately, the oil did not directly enter the river and clean up is, by and large, going well. The accident - this time - was not the massive disaster many feared and continue to fear. The experience rightfully shadowed our conversation the next day, raising more questions than answers. The political, economic, and other systemic forces 'feeding' the need to move oil on trains are strong; where in the system can we find the leverage that will 'drain' this need? 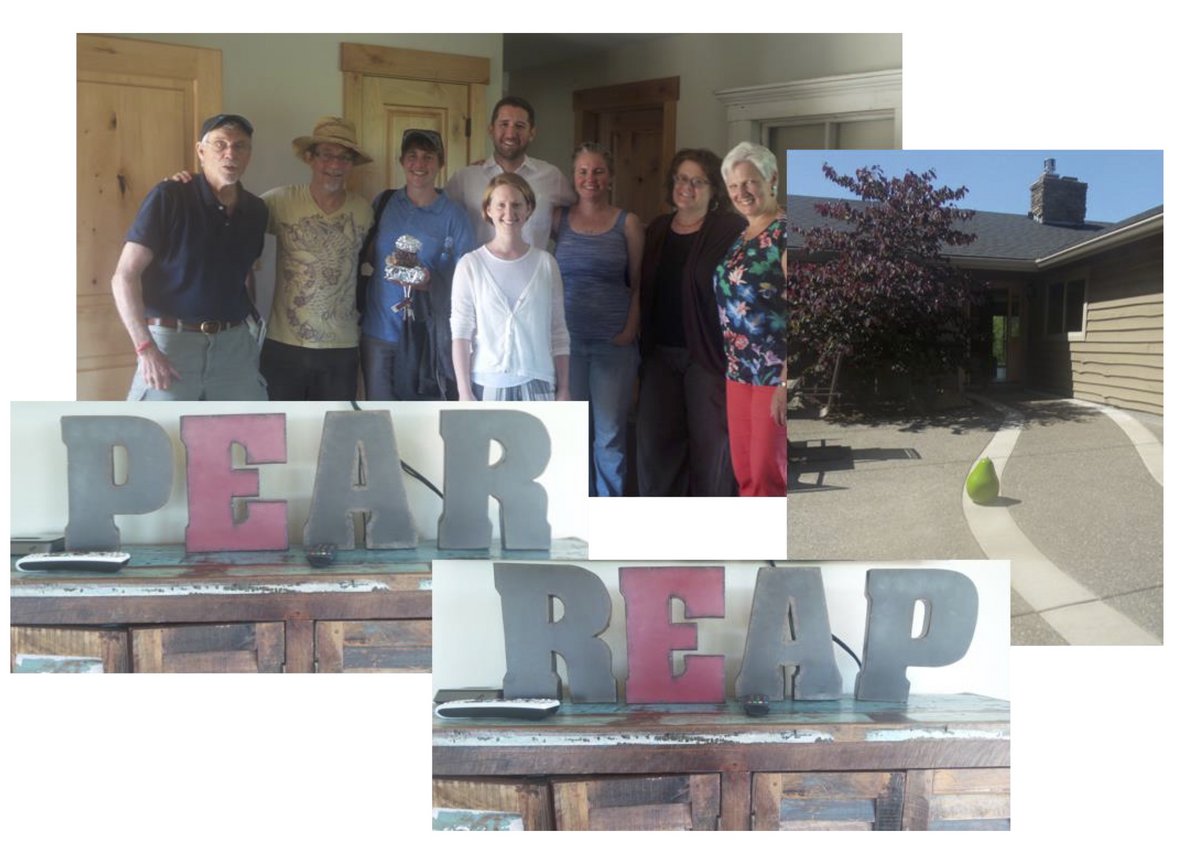 What did we leave with?

'Pausing' brought us great joy, pears and much on which to think and act. Our participants reaffirmed for us the critical nature of this missing piece of work - evoking from communities their innate capability to be smarter, and more effective, together. But their stories and insights also revealed the size of the challenge ahead. Our current social and infrastructural systems do little to support these innate capabilities - we un-learn systems thinking at an early age, learning instead to silo and direct our knowledge in linear ways. We tend to engage far more in competition than collaboration as we move through adulthood and the working world. We are awash in information and yet still hoard it. We talk much more than we listen. Still, this ad hoc 'community' gave us hope, plans, and support. We are immensely grateful for the interest Invoking the Pause showed in us and the nurturing support the Confluence Project provided. We found our form; follow our progress at www.innovation-ecology.io!

1 Some gatherers fit in more than one category!