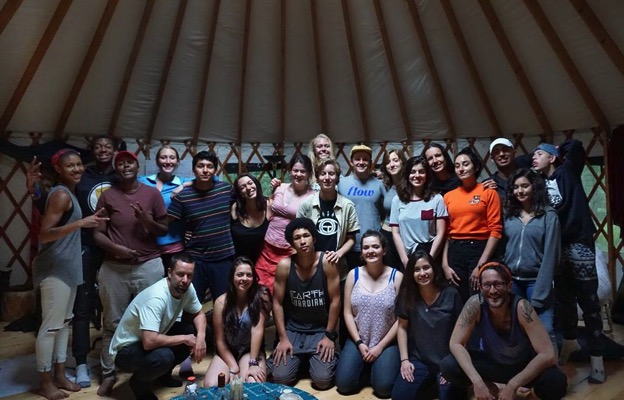 Young people, like their adult counterparts, are making strides in the environmental movement across the country. They organize their classmates, their parents, and their communities around issues they care about. But often, young people feel lost in trying to make change in a world that seems like they have little control over. Young people of course are essential in the environmental movement, as they are they are stakeholders in their own futures and should be able to act accordingly for a world they want to see.

This is what Earth Guardians, a youth centered organization seeks to do.

Started over 20 years ago, Earth Guardians seeks to empower young people to take action in their communities. The RYSE Council is a group of young people who have begun to take action and serves as a point of contact to connect youth across North America and work together to create change.  Every year the council hosts a gathering, and this summer was our 3rd annual gathering where we came together, figured out who we were, and how to take action!

The retreat took place for a week at the Hummingbird Ranch, in the mountain town of Mora, New Mexico around 100 miles northeast of Albuquerque. This location was particularly special because it allowed for us to connect to the land as we also connected with each other. This year the council has shifted as older members aged out and new members came in. The group, around 25 members, represented organizations and communities from across the country including schools, small towns, big cities, and local organizations.

We began our official program on Monday and focused on defining who we were. What our goals and dreams were individually and as a larger group. Our first activity was the construction of a physical timeline. The older members of the group made a timeline on the floor made of sticky-notes that showed the council’s history and where we were today. Then we had the opportunity to have an exchange between new and old members on what he had done in the past and why the older members saw RYSE transforming throughout the year. 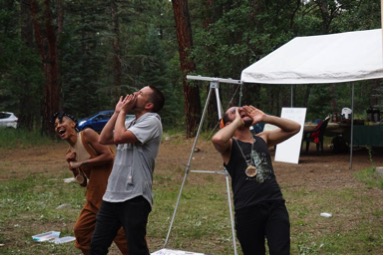 We learned that there had been points of action, usually around the retreats, and also points of inactivity when we had not seen each other or connected virtually in a long time. By having formal points of interaction among older and newer members we were slowly unraveling the DNA of RYSE and also ensuring everyone was on the same page. The night continued with  a spoken word activity, in which we all created poems through prompts that our trainers presented to us. We had a chance to perform these and share ourselves through writing.

On Tuesday, we did some learning as we dove into the Story of Stuff. We talked about our consumption based society and made reflections on our own habits back home. Later in the day, we dove deep and explored how our identities play out and intersect. We talked about where we are in the world, where others are, and the meaning of social power and social change. From this session, we learned that we all are at different points in our lives and have distinct experiences we bring to the council.

These two days devoted to understanding each other as individuals allowed for us to take on the task of understanding who we were as a team. Wednesday was a very “heavy” day because we dove deep into our issues. We primarily did so through an activity called the “fishbowl,” where questions were asked one by one and only about 5 members of the council at a time would answer them. These members were the most passionate or informed on the question or topic being discussed. This activity let us touch on many important topics in an efficient manner and finally settled some unfinished business.

Even the trainers’ could tell this was exhausting today both physically and mentally for the council. Thus, they gave the council some time to explore the beautiful landscape that was around us. Here is where we noticed what makes our council so unique: we love to play. We took a trip down to the river and connected with our surroundings. Although our ages ranged from 13-23, every member was able to speak and truly listen to each other. Little did we know at this time, we were becoming a family. To end the long successful day, we gathered around the campfire and participated in an activity that reminded us of the other beings in the world that we were gathered to care for.

Now that we had relaxed our minds, we were ready to dive back in. Thursday began with several activities that led us to naming who we are and what we believe in as a council. As a team, we came to the conclusion that, “We believe youth leadership in the climate justice revolution. We believe in using people power, education, creativity, and intersectional community-based solutions to make a better future. We believe in leading a movement with the principles of empowerment, connection, equity, peace, and love.” The entire training facility glowed as we cheered on each other for growing as a team and defining our goals.

But those goals needed strategy in order to be enacted. For the rest of the day on Thursday, we focused on the structure of our council, which we decided would be four individual teams focused on a part of our larger goals. These four teams, or what we call working groups, were decided to be the Foundation Team, the Action Team, the Training Team, and the Media Team. The Foundation team was constructed as the logistics and moral support team. The Action team leads the group in action movements and campaigns. The Training team is meant to create information in order to train other youth on how to be leaders in the movements they participate in. And the Media team focuses on the social media campaigns and outreach. Each team produced their own SMART goal as a first step into action for that team as well as a way to inform the rest of the council the needs we would need from each other.

By Friday, all of this decision-making led us to an activity that we had completed in the beginning: the timeline - only this time ALL members of the council contributed. Each team placed their SMART goal individual timeline onto the larger one (pictured above.) Through this activity, we were able to see the level of commitment we were asking of each other and also the amazing work our 25 minds had done in only 5 days! We were ready to take on the world and change it for the better!

But before we went off to change the world, we had one last night of having fun together and celebrating what we had accomplished as a team. We held an open mic night that gave each of us an opportunity to share our creative side, which we found out each and every one of us had. Recognizing the immense talents of our group reaffirmed our ideas of making this world a better place. In that moment, we were no longer the individuals we had come as but instead a family unit. We had found our tribe and were ready to create change in our world!