In 2008, Britta Riley incubated the idea of growing fresh and nutritious food in her small, urban apartment in Brooklyn. By 2009, Windowfarms was born. Britta, an artist, designer, and entrepreneur, expanded her idea of a hydroponic garden to source knowledge and improve her design from a community of likeminded “do-it-yourselfers.” Fast-forward three years: an Invoking the Pause grant, an astounding $257,000 Kickstarter fundraising campaign, and 32,000 world-wide Windowfarmers later; now, the first “fully manufactured in the USA” Windowfarm kits are about to make their way to homes and apartments around the world. 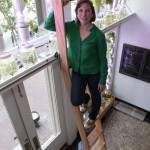 We spoke with Britta about her new project, the risks she took in bringing her latest design to market, and her 18-foot Windowfarm installation/public garden in Louisville, Kentucky.

You have been experiencing tremendous growth recently. What is currently happening with Windowfarms?

What we are working on now is manufacturing Windowfarms for those people that aren’t D-I-Y-ers (“do-it-yourselfers”), but are coming to us with an interest in growing their own food. We have found that being receptive to community input leads us in exciting new directions. We have added another component: a for-profit organization selling these beautiful, new, fully-designed and engineered Windowfarms. And as a “collateral delight,” we found that it is largely funding our non-profit work.

Britta’s business plan for the new manufactured design approaches the ‘customer as investor.’ Her strategy is to create a tiered fundraising campaign. With each level of ‘investment,’ the customers will receive a Windowfarm (size-specific to the amount invested).

You set a goal to raise $50,000 to manufacture these Windowfarms through Kickstarter. Remarkably, you had almost 1600 backers and raised more than five times that amount at $257,000. What was your reaction?

It was just one of those moments where you want to reach out and hug 1600 people!

Britta explains that in order to manufacture the Windowfarms, she knew she needed $200,000, which is what she initially proposed to Kickstarter. After consulting with the founders, she adjusted her goal to $50,000.

Kickstarter explained that a $200,000 goal was too high and people would not respond well to it. Unless you raise the full amount you set as a target, you do not receive any funding! There’s a psychology behind the phenomenon: a peak happens once you hit one-third of your goal. People will begin to join once they feel comfortable that the project will be successful. What this incentivizes is setting goals much lower, so you move quickly past them.

Were you confident that you would reach your goal?

No, I wasn’t. That was one of the scariest months of my life. Imagine what would happen if I had brought in only $50,000 instead of $200,000. It’s a gamble; being an entrepreneur always is. We often hear the positive stories of entrepreneurship, but you need to be aware of the huge risks. You have to be prepared, find a centered place in yourself, and then jump off that ‘cliff.’

Since the campaign, you have been traveling the country searching for manufacturers. What are the criteria you are looking for in these businesses?

I’ve started to learn how we are so unconscious of the environmental impact of our consumerism. I am looking for businesses that make environmentalism a priority, but these are hard to find. I have found several that are building it into their business model, but are hesitant to announce this because they fear that customers will find these practices too risky [and cost ineffective]. It’s not easy to add a green component to manufacturing; it has to be at the heart and soul of that business.

An 18-foot Windowfarm was installed at the 21C Museum Hotel in Louisville, Kentucky. It involves quite an innovative twist on the “public library.”

The installation, called the “Louisville Public Windowfarm,” has been up and running for six months. It was conceptually designed to function similar to a public library, but instead of checking out books, patrons can make their own salad. The museum staff and employees of neighboring businesses are helping care for the plants. Additionally, the farm contributes fresh vegetables to Proof on Main, the restaurant next door.

This Windowfarm replicates a library in other ways: Britta’s brother Shane, a carpenter by trade, built a rolling 18-foot tall library ladder as part of the installation. Now gardeners can climb to the top to care for and harvest their food.

The evolution of “community” that has grown from the crowd-sourcing creation of Windowfarms, now leads to their care and maintenance.

There is something critical in gardening where ownership and responsibility come into play. My friend and mentor, Greg Raft, a commercial hydroponic farmer, is working to maintain that Louisville Windowfarm. Greg is also drop-shipping pregrown baby plants to other Windowfarmers that are unable to grow directly from seeds; it’s like a living refrigerator.

Britta explains that growing from seeds requires advanced skills. Greg provides an alternative for a large community that would like to grow their own food, but don’t have the skill to do so yet.

It is interesting to see this business, and possibly more, that have sprung from the original Windowfarm model.

That is one of the wonderful things in dealing with this ecosystem. We are in a moment where we are able to peek at what is beyond the last incarnation of the green movement. There is a sea change now; we are learning from these ecosystems and all the capabilities that come from our understanding of how nature operates. There is so much more creativity possible in the way we live our lives. There are new possible technologies that are fundamentally driven by nature. There are whole new industries that we haven’t discovered yet.

How has life changed for you since Windowfarms has taken off?

I’m learning how to find a centered place within the chaos of daily life. I have a tendency to live off of adrenaline, but know that it isn’t good for my body. I’m running a health-focused project, and I, myself, care a lot about that, but I am pushed to my limits all the time.

Invoking the Pause was created to provide a space and time to pause and reflect. Are you able to do that?

Yes, I now ‘schedule’ pauses for myself. Invoking the Pause’s original grant enabled me to go to Finland to meet with our Finish Windowfarm community. That created an opportunity to regroup—while also staying in a yurt! My time now doesn’t necessarily look like that, but I’ve tried to incorporate pauses into my daily life and on an hourly basis.

What is the next step for you and Windowfarms?

We are hiring people and building a team. I have much to learn about people; already this project is much bigger than anything I have run before. I am focusing my energy on creating this community, which will, in turn, lead our greater community. That is the direction we are going!

UPDATE: A brief article on Britta and Windowfarms appears in the April 2012 issue of Fast Company. Take a sneak peak here.