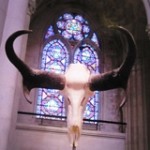 From the initial migration of the Council of Pronghorn to the Big Apple, to the experience of meeting over a thousand visitors on opening day of the Value of Water exhibit, Felicia Resor and Ben Roth describe the joy of bringing their brainchild to Manhattan.

We at ITP celebrate the successful collaboration of the Pronghorn project created by Terry Tempest Williams, Felicia Resor and Ben Roth and the Value of Water Exhibit at the Cathedral of St. John the Divine. The Council of Pronghorn was designed to bear witness to the environmental harm of the Natural Gas Fracking operation in Wyoming.

While no one– including the artists themselves– anticipated the project’s migration to New York, these collaborations and the project’s proliferation is aligned with the mission of Invoking the Pause. And so far it has been a huge success: opening day saw 1,500 visitors to the Value of Water Exhibit, and an expected 1 million visitors are expected before the exhibit’s close on March 25th.

These are the summaries and excerpts from our interview with Ben and Felicia after the opening exhibit. 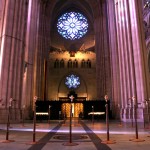 Tell us about your overall experience!
Ben: The opening of the Value of Water exhibit at the Cathedral of St. John the Divine, meeting all of the artists and educational staff, and the overwhelming reception of 1500 guests at the opening was truly amazing. The opening event was unlike anything I’d ever experienced before.

It must have been gratifying?
Ben: The Council of Pronghorn installation was perfectly placed in the beginning of the Nave, so you have to walk through it to get to the show. It held it’s own amongst the vast array of well-known artists and compelling installations.

And we had the pleasure of getting to watch as newcomers walked in, stopped, looked at the Pronghorn sculptures and then gathered around to read the essay of our piece.

I could only hear bits and pieces, but at one point there were twenty people discussing the cross-section of art, environment and water. I was pleasantly shocked that the staff was so engaging.

This is what the Invoking the Pause project was meant to do, and it sounds like it was achieved: using art and science to pierce apathy toward climate change and spark a greater conversation.
Ben: Yes, and the staff was ahead of us on this. We had met with them before the opening, and I had also talked with them two weeks earlier when I first arrived with the installation.

The staff wanted to engage guests during the event by asking people to stand in middle of the circle of the nave and ask themselves how they felt. Next, they asked them to stand between the posts of Pronghorn skulls and see if their feelings changed from the new perspective?

The collaboration of this project was happening at all levels, it seems. Exciting!
Ben: It helps that the Pronghorn piece naturally evokes discussion, interaction. But the staff was way ahead of us. We just added anecdotes and background.

You exported your work from home– all along is this what you wanted to do? What did you go through as others were metabolizing the installation?
Ben: The project is 2 years mature, it has been a labor of love and a challenge, so bringing it to fruition in a way that was greater than I imagined was beyond rewarding. It justified all of that time & energy in a sense.

On that note, describe what it was like to share your brainchild, how it was letting it go out in the world?
Ben: I imagine it was like dropping off my kid at college! <laughs> The other sense that I had was that the whole time we were there it wasn’t about Felicia, Terry or myself, it was about the sculpture.

The Pronghorn piece is now a life of it’s own and has it’s own relationship to it’s audience, and what it is bringing to the world seems so far beyond our original conception that it truly feels like it has left home.

And we need to respect it’s own path. It’s standing on its own in this amazing space I never would have imagined, forging relationships with a community that is far outside my own.

It was a different feeling than with my own work. Council of Pronghorn is about bringing forth change, designed to have an emotional impact on people. It seems to be working.

Felicia: I totally agree that the Pronghorn installation developed it’s own independence in the project, like we were parents letting go. And it couldn’t have been a better environment, in such an institution as is the Cathedral. The staff understood what it takes to care for art– they were very prepared for it. And I agree that it was different than any art I’ve done before.

What do you think about the East Coast exposure of Council of Pronghorn?
Felicia: I think something Ben, Terry and I talked about was the unforeesability of experience. When we were in the gas fields in Wyoming, conceiving of this project in it’s earliest stages, we would never have thought of a sculpture that would end up to be in such a foreign place and yet feel so at home.

Now that it has traveled to New York, the Council of Pronghorn is getting more exposure than we could have imagined. One million people will see it this year, and that’s the same viewership it received in Jackson: a beautiful symmetry. And the symmetry is replicated in that Fracking activism has expanded to the East Coast as well.

Ben: When we made that sculpture, fracking wasn’t happening yet on East Coast, so the Pronghorn was meant to reflect the consequences to Wyoming & the Rockies. Kind of a trip that it’s happening there as well.

And tell us about the Symposium?
Ben: The symposium was energized and you could feel a sense of urgency about environmental issues. We didn’t talk about particular events related to the pipelines in Pennsylvania, etc., but the talk was about urgency, intensity and desire to bring about change. And a desire to be proactive in mass media and television. Many people spoke out against the media, but the panelists pointed out that the media is still the best way to communicate with a mass audience. T.V. is not inherently an evil tool if the message behind the media is good.

After the discussion, I gave an extra skull to an activist in the crowd who spoke for a long time in the back. She was thrilled and teared up to receive it. It was definitely an emotional connection.

Felicia: Their juices were flowing already about Fracking since the exhibit was about water and energy issues. So the concept of the water being poisoned via fracking in Wyoming was relatable.

Although the Pronghorn don’t obviously relate to water, the indirect connection was easily made by the audience.

Terry brought the whole room to tears talking about Wyoming and the sculpture. Many people walked up to talk with her afterward. She was amazing and, just like the Pause, had people convening.

Was the piece interpreted the way you expected?
Felicia: The artists discussed this during the symposium – the concept of audience interpretation relating to the balance of art and activism.

Different artists had different responses. Some artists drew a distinction between formalist art and activist art, but I don’t agree with that delineation.

Yet the conversation itself did open me up to the idea that as an artist I may seek one interpretation from an audience, and I have since opened up to allowing for another interpretation.

Ben: I feel like the message of sublety and finess in activist art is valuable. Instead of spoon-feeding the audience what the interpretation of the piece should be, it’s important to allow for a different response.

Bonking people over the head isn’t the way to go. We wanted our piece to be emotionally impactful yet not offensive to anyone.

People had strong reactions that we weren’t expecting. Some saw Crucifixion and the outreaching arms of the Pronghorns – not what we intended but it was wonderful.

Obviously the religious connotation wasn’t there while it was displayed at the Jackson Hole Community Center for the Arts, but in a church it was there.

Felicia: Something I saw that ran through our piece during the Pause and at the symposium was the spiritual component. Our “Pause” through ITP was spiritual for Terry, Ben and I — it changed our lives and allowed for contemplation and reflection.

Wyoming brings a very spiritual connection to the land. We wanted to tell that story to others, but you can’t tell the story. You have to instill it.

The consciousness and meditation that was a part of our ITP retreat was all brought forth again in the Church. Whereas Jackson highlighted the wildlife, the Cathedral of St. John the Divine highlighted the spirituality again.

Overall, the entire experience was fantastic, and we were grateful for the opportunity that ITP brought to bring the Council of Pronghorn from concept to completion and out into the greater world!