ITP:  You've been an activist on several different issues throughout your career. What sparked you to become involved with the HighWaterLine project, and how did your collaboration with Eve Mosher come about?

Heidi:  I had been working on environmental issues for over 14 years in different capacities. I'd done everything from lobbying in Washington, D.C. to working with grassroots environmental organizations overseas and domestically. What I heard constantly from all of these groups was their desire to go "beyond the choir". There was a shared recognition that it wasn't enough to have support from the people already on board, that reaching out to the general public was necessary for real social change to occur. Even though the groups had this recognition, I found that they kept using the same tactics.

I was curious: how do people really learn new information? How do people really change? So I started talking to human behavioral experts.  I discovered that first and foremost, we learn best through self-driven curiosity—just like a child. But most environmental groups "talk at" or sometimes even chastise their target audience in the hopes they'll do what they want.  This teaching technique doesn't work for kids or adults.  So this led me to the question of who out there is using the more effective techniques? I came across the artist Eve Mosher and her HighWaterLine project in New York City one day while reading the New York Times. I called Eve out of the blue and introduced myself, and said I would love to work with her, and she said she would love to work with me. 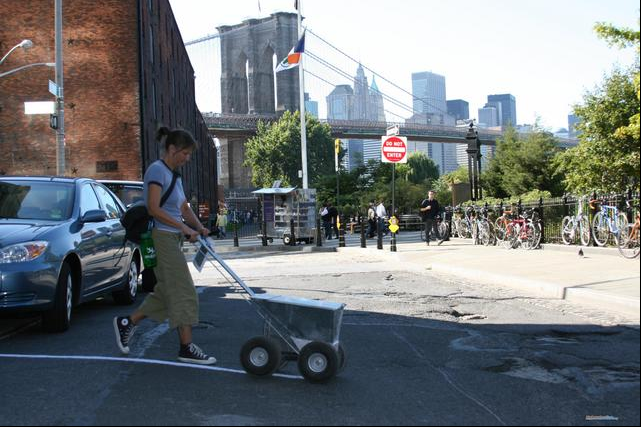 We first collaborated together in 2011 on a project for the organization 350.org.   Then in the summer of 2012, while discussing the incredibly depressing news about the summer's record breaking droughts, extreme glacial ice melt, and other cataclysmic climate change news, we decided to join forces to greatly amplify her HighWaterLine project.

Since over 56% of the world's people live in cities vulnerable to sea level rise and extreme flooding caused by climate change, Eve had always planned to offer the HighWaterLine as an open source project that people in other cities could adapt to and use in their own communities. We wanted to bring the project to a place where climate vulnerability was a serious issue and where people actually wanted to realize the project locally.  That process led us to Miami, the most climate vulnerable city in the U.S.


ITP:  You and Eve used your ITP grant to go to Miami and meet with some of potential collaborating groups before you went forward with any more planning. How did taking that 'Pause' early on shape the process moving forward?

Heidi: The 'Pause' really made a big difference in the overall project. Throughout our collaboration, Eve and I have tried to be thoughtful about how we walk in the world, and focus on how we do what we do. We only want Another important thing to recognize is that not all communities communicate online. There's a sense of respect that's shown by actually going to a place, sitting down and taking the time to have a real conversation in person. You can't read body language online, and studies have shown that a deeper trust is created between humans when they meet in person.  This is naturally obvious to everyone, but somehow our culture has forgotten this key element of being human.

I think of it like a family: would a family ever be able to function entirely online? No. So it's pretty odd that we think that communities can exist entirely online. By showing up and having a real conversation in a way that was respectful, and inquisitive, and open-minded, we established trust in a way we could never have done with emails and phone calls.

The other reason it was important to actually go spend time there is that Florida has a history of outside groups coming in to do advocacy work without really asking what the local community wants. We wanted to make sure we were doing something that complemented what local groups were already doing. We asked, 'How can this be a tool for amplifying the work that people are already passionate about?" and "Can this artistic tool help them take their work to the next level?"


ITP:  What was the most unexpected or surprising thing you discovered while in Miami?

Heidi:  I'm inspired by how much Miami has to teach the United States and the world about resiliency. Communities here have overcome economic hardship, political persecution, natural catastrophes and more. They have overcome tremendous obstacles and bounced back.  So the art of resiliency is something many people from Miami can teach us.

Another thing I've been inspired by is the commitment of first generation Miamians who are passionate about building a sustainable Miami. Their parents hail from the Dominican Republic, Cuba, Haiti, Central America, South America and more, yet they were born in Miami. Many of them left Miami for college or jobs, but came back to the city because their heart is in Miami. When they come back they want to improve the city including creating more public transportation, making the city more sustainable and livable overall. At the same time, they are thoughtful about the culture they come from because they are rooted in their culture. So I've been inspired by that combination and by how hard they are working to create a better future for the city they love.


ITP:  What do you hope will happen after the Miami project is complete? What actions do you hope it will inspire?

Heidi:  The vision of HighWaterLine is to create an "aha" moment:  To use art to visualize the future: both the local impacts of climate change as well as the solutions. To use art to re-imagine the future and what is possible.  With the hope that once you visualize the possible it's hard to get it out of your mind.

One of the wonderful things we've heard from local groups here is that they see this as just the beginning. They have embraced this project as a sort of spark to get the ball rolling on building a resilient Miami. Art has the ability to bring different movements together because it's outside the box and creates a third space where people can coalesce.  The hope is to use this third space to break down some of the silos and provide a new space for groups to collaborate.


ITP:  We are increasingly seeing groups using media and art as a way of changing attitudes and behaviors around climate change. How do you see these intersecting with the "hard science" of statistics and research on the facts about environmental issues?

Heidi:  When you look at how people are inspired to rise to their highest self, it's almost always done by calling upon a deep value. Throughout history, revolutions have involved artists, writers and poets that have inspired people to rise above their every day way of doing things.

Take a look at Martin Luther King's "I Have a Dream" speech. It had zero statistics. It was more about a greater vision for what our country could be, and that inspired people on a different level. We humans are a pack species, and that's why we need to inspire people on a deeper level of community. I've never seen anyone rise to their higher self based on just a statistic.

We're also personalizing the information by showing how places that are important to people, the places where they live, work and play, will be impacted. When you see something change in your daily migratory route, you absorb it on a much deeper level than if it's presented in a space that is foreign to you.  We are going to where people are at, altering the public space with intervention art and because we're doing something that's so unusual, they have to acknowledge it, and it sticks in their minds.


ITP:  The news about climate change can seem so grim, so doom-and-gloom sometimes. What keeps you motivated in the face of all this?

Heidi:  One of the things we did in Miami was to open our first workshop by connecting via telling our personal stories. We started by asking the question, "What is our personal passion for doing what we do?"

My story is that I had a friend, Jeremy, who died in his early 30s of prostate cancer. As he was dying, one day we were sitting in the park and he asked what was on my mind—he wanted to hear someone else's problems for a change. I told him what I was worried about and he looked at me and said, "Life is wasted on the living." In that moment, he gave me the gift of appreciating the full beauty of life and realizing the power that we have while we are here. Because basically no matter how much you fail in any given project, you have the chance to try because you are alive. So ever since then I have appreciated the gift of knowing that while I am alive and healthy, I have the chance to try.


ITP:  What is the number one thing you wish everyone would do to help the environment?

If everyone would wake up tomorrow with this intense realization that this is our home, and this is all we have, that to me would be globally transformative.

ITP:  You've shared with Invoking the Pause a little about your plans for the solar energy campaign in Los Angeles. What else are you excited about in the year ahead, both in terms of HighWaterLine and your other projects?

Heidi:  Eve and I share a passion for bringing people from different disciplines together to find new and innovative ways to tackle social and environmental problems.  Together we created a nonprofit called Creative Catalysts to carry that work forward. The HighWaterLine project has generated a lot of excitement and it's relevant everywhere, because over half of the world's population lives in areas that are vulnerable to sea level rise and extreme flooding.  So we plan to move forward with the HighWaterLine in 2014 and take advantage of other amazing opportunities to help environmental movements that have a lot of potential, but are looking for help in engaging the general public.

One of the things I'm most excited about is working in Los Angeles with the movement to ensure LA receives 20% of its energy from solar by 2020. It's possible, and there is a growing movement for solar in LA.

Humans have always looked to the sun in awe. It has inspired poems, songs and paintings across cultures, so we are thinking of how we can bring that primal awe of the sun back into the message about solarizing energy. And L.A. is a mecca for creativity, so there's tremendous potential and creative power in LA as well.  I'm excited to be collaborating with the diverse creatives of LA - graffiti artists, musicians, comedians, storytellers and others to help amplify the message.

A lot creative people in L.A. already have solar panels on their houses. So it's a natural bridge of taking what they're doing in their personal lives to inspire and activate the general public. L.A. has the sun, it has the rooftops, it has the creativity, so it's just a matter of a catalyst bringing them all together.

That's how I see the world overall. I see everything as interconnected. I constantly see opportunities to bring people together around common goals. That's my passion, seeing how everything fits together, how everyone has something in common and then serving as the catalyst to spark collaboration.  It was torture for me in college to see all these connections, because I couldn't be happy with just one major. But now it's central to what I do: using creativity and multi-disciplinary approaches to show how things are interconnected, and to build more resilient communities at the local and global level, because we're all in this together.