Posted - 12/10/2013 Keeping the Smokestack in the Picture by Monica Wilson, GAIA 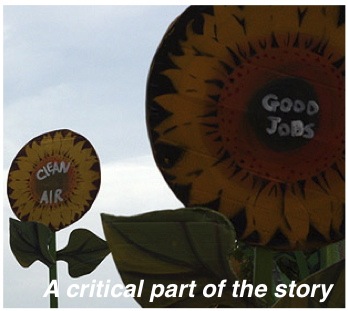 We are often told to lead with the positive and focus our messages on the positive side of our vision for a better world. We’re in a movement that has a dual purpose of ending the dirty practice of burning waste and building zero waste systems. Systems with positive, transformative benefits for local economies and jobs, resulting in clean air and healthy communities. I’m frequently advised to focus my messages on the positive side of this vision like these sunflowers instead of waste incinerator smokestacks.

But I need to say more about the smokestacks.

Our members and allies are fighting incinerators and building zero waste systems from the ground up. And there’s good news. Time after time, communities are succeeding. Over 100 new incinerators have been proposed nationwide in the last decade, but none have been built. This is an incredible story about grassroots activists achieving victories for people and the planet.

In addition to the monumental grassroots success in stopping new waste burners, communities are working to close the nation’s 86 old incinerators, like the one in Detroit that is pictured here. Once an incinerator is up and running, this is harder to do.

Why do communities fight so hard to close and prevent incinerators?

To clinch the argument against burning waste, extensive and undisputed research shows that we create more jobs, less pollution, and protect the climate when we recycle, compost, and reuse.

So what’s the problem? Incinerator industry propaganda continues to drown out health, justice, and climate realities in state and national policies.

In cities, incinerator promoters often show officials pictures of facilities that conveniently don’t show the smokestacks—and what comes out of them.  Perversely, many states give climate and renewable energy subsidies to incinerators, even though they are the exact opposite of what is good for the climate, and also the exact opposite of renewable energy. National media outlets aren’t covering the story that communities are overwhelmingly rejecting incinerators, and instead they repeat industry claims.

I hate to say it, but it’s about to get worse.

The EPA just opened a loophole for burning garbage with almost no regulation. Waste can now be burned in coal plants, cement kilns, and industrial facilities across the country. You could fly a B52 bomber through this new gaping, “free pass to pollute” loophole. The same communities that suffer with incinerators will be the ones hit hardest when even more pollution is released unchecked from industrial facilities.

And the impact on the climate? Remember that burning waste pollutes 2.5 more carbon dioxide than burning coal (per unit of electricity). So while the EPA is cracking down on coal plant emissions, it’s creating a huge backdoor to burn something that’s even worse.

As this movement has been sharing the positive zero waste vision with allies, advocates, and officials across the country, we’ve seen that for some people, zero waste inspires action and change. But it’s going to take more than the possibility of positive alternatives to close the 86 incinerators built in previous decades and to prevent a new fuel market for dirty waste pellets. What gets many people from all walks of life to stand up against incinerators by going to meetings, deciding in voting booths, and raising their voices is an honest look at the poisonous pollution, the climate risk, and the economic burden that incinerators bring.

To close these incinerators, make zero waste possible across the country, and do right by the climate, we also have to put the smokestacks front and center.