In September, a group of us got together for a 'pause' to brainstorm about experimental research on climate change communications, see here.   Below, I have included some of the pictures from this retreat to share a bit more. What is on my mind though is Hurricane Sandy.  It's been mind blowing to see the images of the storm and hear about the tragic deaths and damages.  But the silver lining, if we can look for one, may be the shift the storm has produced in the conversation on climate change.  Amazingly, the topic did not enter the presidential debate.  But it has inserted itself now in the form of a giant, late season hurricane.


Obama clearly did well with his emergency response and disaster relief, gaining the praise of Republican governor Chris Christie, and endorsement from New York City's Mayor Bloomberg explicitly for his action on climate change.  Sandy perfectly illustrates our extreme vulnerability to the weather.  Just the kind of visceral impacts that communication 101 tells us are needed to elicit risk avoidance behavior.  If this is not a visceral impact of extreme weather, then I don't know what is.  And as we get a little distance from the storm, indeed many are talking about links to climate change, and even starting to bypass the conservatism of the climate scientist community to push a strong messaging about attribution.  Bloomberg wrote in his endorsement "Our climate is changing…and while the increase in extreme weather we have experienced in New York City and around the world may or may not be the result of it, the risk that it may be — given the devastation it is wreaking — should be enough to compel all elected leaders to take immediate action."

This is about as good as it's gets with climate change messaging. After any major weather event, there is always that lingering question - is this climate change?  Can we be sure this would not have happened even if we were not pumping CO2 into our atmosphere?  The answer with Sandy is, as usual, no.  This is the special feature of climate change that makes it a total communication nightmare.  It's kind of a cognitive conundrum; because even if we experience climate change, we can't know that it was it.


Climate change describes average conditions, not single events.  It has no unique signature; such as when it is climate change (and not the normal weather) the rain comes down purple and extra shiny.

Scientists can never definitely attribute any event to climate change, because there is no analytical way to do that. Unless the event was so impossibly extreme that it could never be simulated in any run of a climate model except those with enhanced CO2 levels in the atmosphere.  But models are run thousands of times, and researchers build in lots of stochasticity, so most extremes can be simulated.  Climate change makes the extremes more probable, but it does not make them uniquely possible.  This lack of a smoking gun, typically plants enough of a seed of doubt to keep us from tackling the enormous challenge.

But maybe because this event was so extreme and because without a doubt the sea levels are higher and that accentuated storm surge, and because the water temperature was higher than average, which added extra rainfall, the links to climate change are being made pretty strongly and quickly.  And maybe people are just ready, and feeling really vulnerable given the string of extreme weather over the last year and the billions of dollars spent.  Still partisanship on the issue remains with distinctly different reporting on Fox News.

We shall see what the political fallout is of Hurricane Sandy and how this impacts the contours of the climate change debate and what it means for communication research.  I am guessing the real issue will continue to be the selective interpretation of the science, so that policy response continues to be a culture war.  Hence our interest here at Duke in the research question of how to make the problem of climate change, and The Environment more generally, less politically polarized.

In the meantime, at the October 17 Invoking the Pause Bay Area convening I promised I would share some good resources on climate change solutions.  I recommend the Center for Research on Environmental Decisions report for tips drawn from psychological sciences, Susanne Moser's review provides a good synopsis of relevant communication theory, and Pidgeon and Fischhoff in Nature Climate Change is good on the social and decision science dimensions.  I look forward to sharing what emerges from the pause at Duke.  Below are some word maps of brainstorming sessions produced by Julie Stuart, graphic facilitator, and a few pictures of the scene. 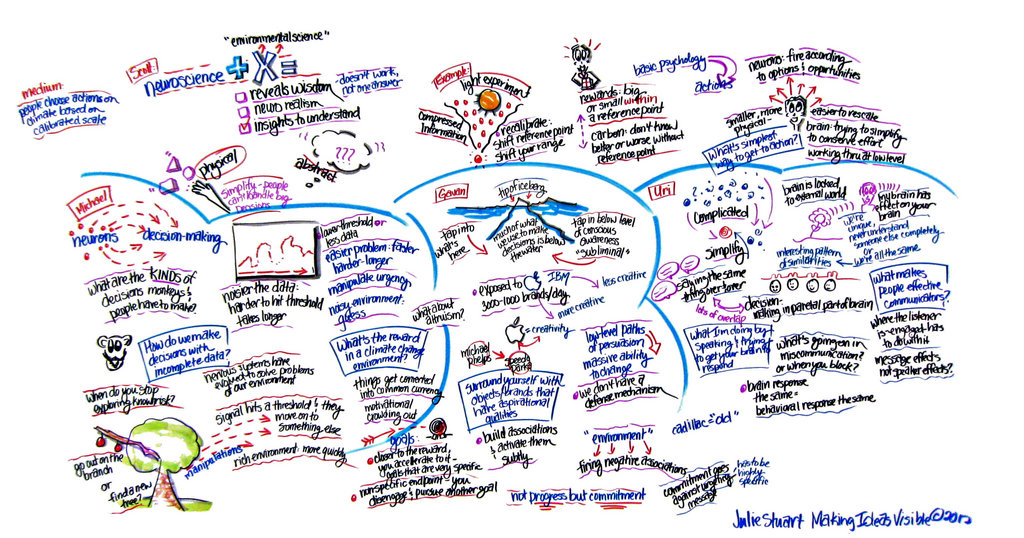 Here is one from a World Café discussion we had in response to the questions like: What are some key things we could work on as a research community? How do you see the fields of neuroscience, art and climate science coming together for a creative collision? 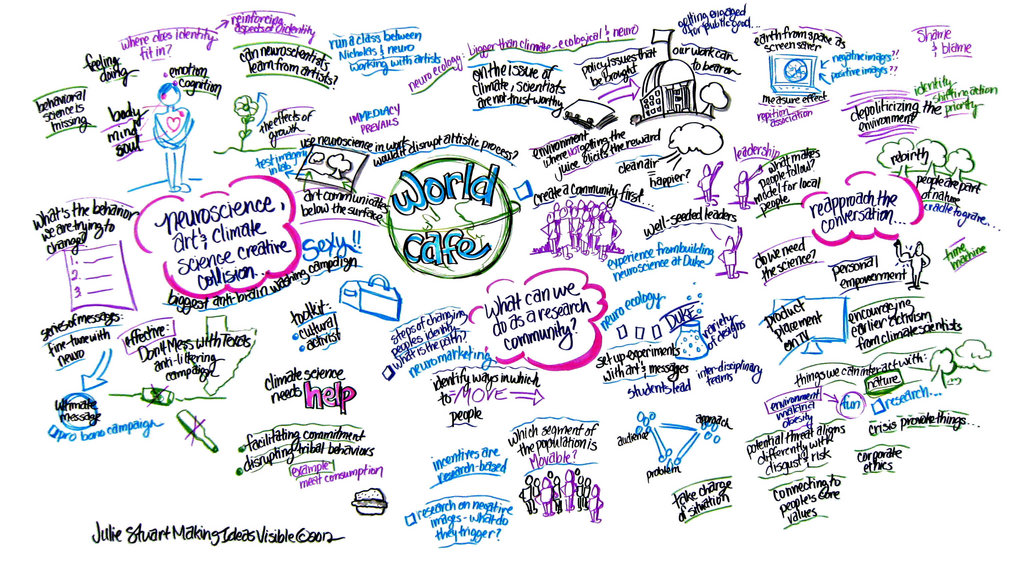 Here is the climate change timeline of events we developed and played around with in discussion.  This is partial as not all notes were added yet, and it may be difficult to read here.  One take away is that while the problem was first discovered by scientists in the 1800s, it was just in the last decade that discussion of the problem has exploded.  The words near pictures in the top right are examples of different message frames and ads (such as "Hope" or "Threat").  My plan is to post this in the hall of the Nicholas School of the Environment, with some colored pens attached and let people add to it.

Finally here are shots of the scene:

Gavan Fitzsimons persuading us that we make most of our decisions unconsciously (Pinar Yoldas and Jack Zhou, and Christine Lillie at back) 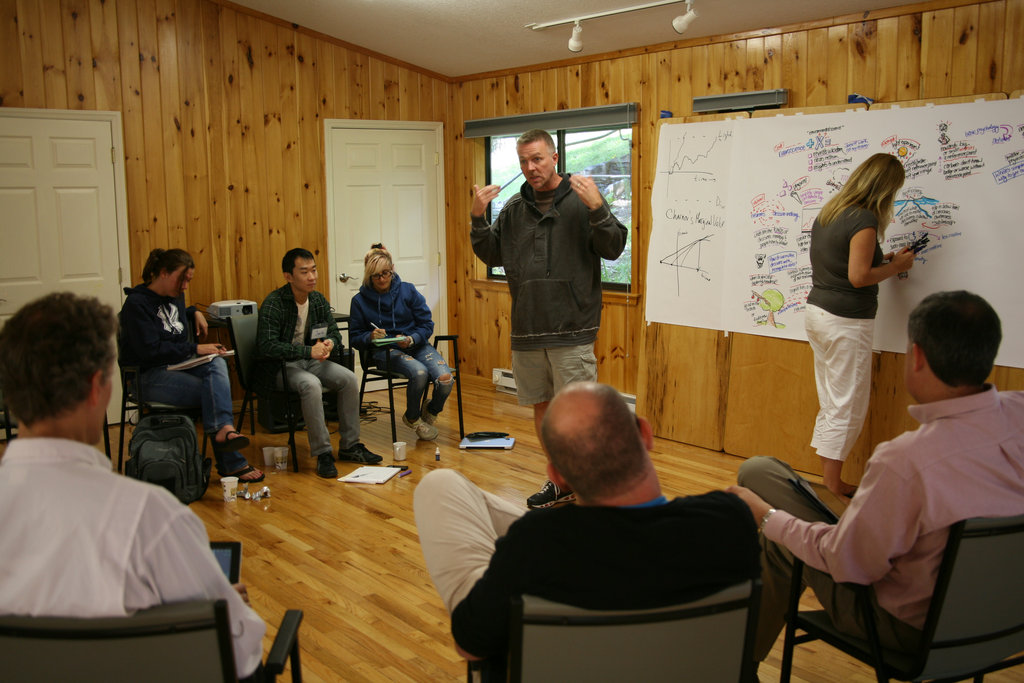 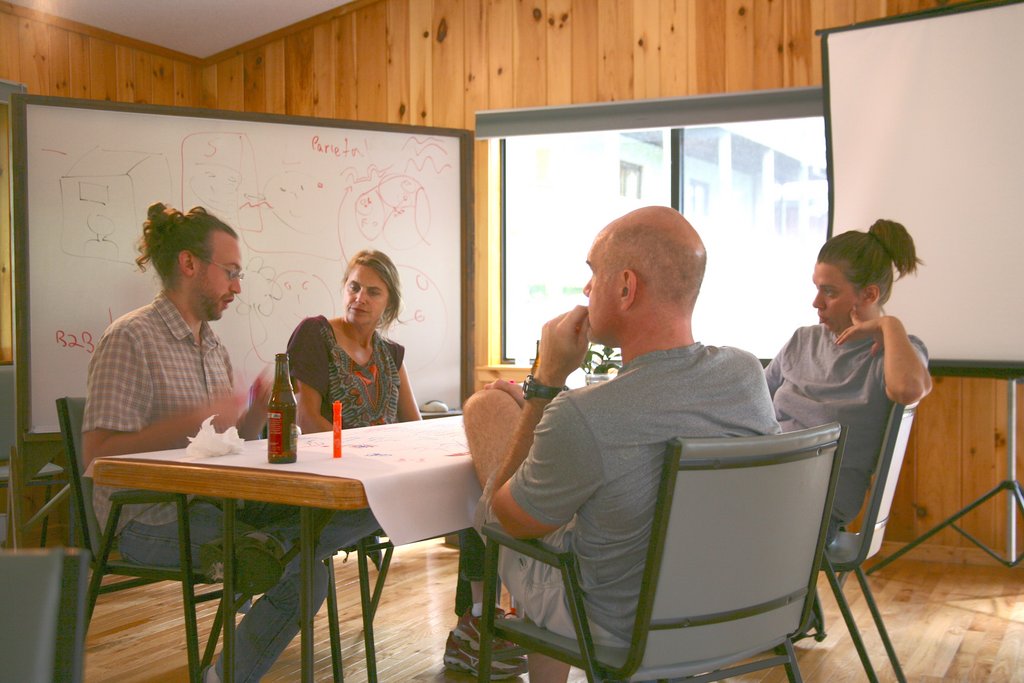 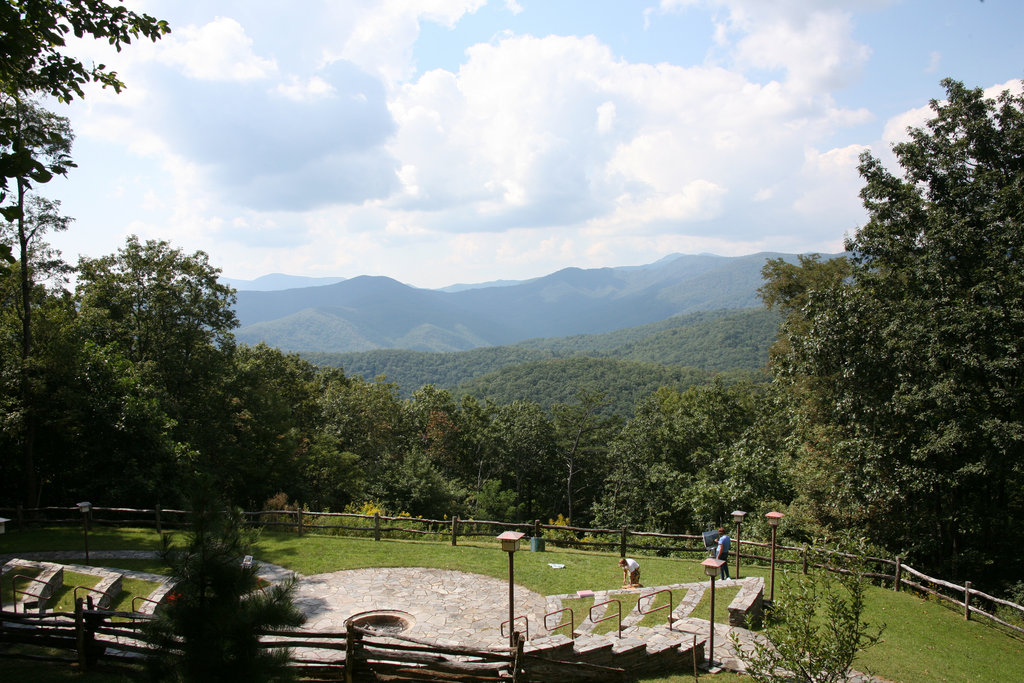