View Blog Archive ITP Blog - Archives > What Strategies of Social Change Do You Believe In? By Lindley Mease

Posted - 01/11/2018 What Strategies of Social Change Do You Believe In? By Lindley Mease 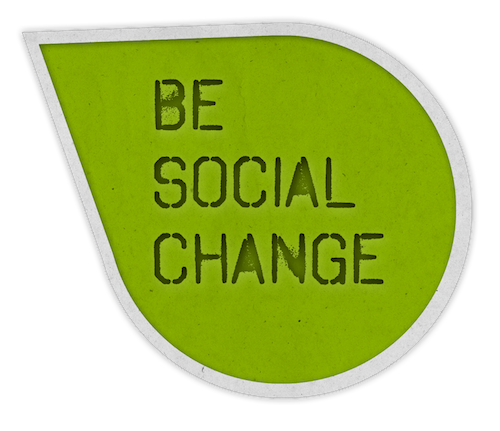 There are about 1.5 million NGOs just in the United States. No wonder their calls to action, their ads with forlorn-looking children, and their mission statements can start blending together. Over the last 30 years, NGOs have increasingly taken on the role of government. As privatization has rapidly defunded the State, NGOs have rapidly expanded to take on the role of providing social services to those relegated to unliveable wages and polluted communities by the private sector.1  Thus, the funding streams for those services are fickle, as they follow the wishes and whims of the ruling class, as they direct the lion’s share of philanthropic funding to NGOs.2

Understanding how you want to give precious time and resources towards the causes you care about, including those that are upending this whole dynamic to put power back in the hands of those marginalized by this system, is increasingly intimidating. And, as Trump even more rapidly defund the public sector, how you choose to support those building alternatives to a privately orchestrated ‘safety net’ is increasingly vital.

Nearly $2 trillion is spent every year by NGOs in the U.S., yet we have seen no fundamental change in wealth inequality, police brutality, mental illness among those without housing, and countless other issues. The organizations providing direct services to those in need are chronically under-resourced, and the organizations fighting the root causes of systemic injustice are politically marginalized by the people and institutions in power. How do we figure out how and where to spend our time and money to have a meaningful impact? How do we give to organizations that are aligned with our worldview yet also challenge us to continue to examine our privileges, whatever those privileges might be?

At Blue Heart we give workshops and trainings on what solidarity can look like. As part of those workshops, I have been presenting a mental model for thinking about different models of social change to help people think about their own beliefs, and how they might inform where they give their time and money. Below, I describe the two axes that make up this model. 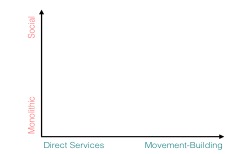 Monolithic & Social Views of Power
Gene Sharp, a retired professor of political science at the University of Massachusetts Dartmouth, outlined a theory of power that is useful in deconstructing how social change makers craft and implement their visions.  First, in a monolithic view, power resides among elected officials and those at the top of corporate hierarchies. If a layperson wishes to influence the behavior of a democratic government, they must elect a candidate that reflects their interests. Unfortunately, in reality candidates quickly become divorced from their constituency and struggle to represent grassroots interests in the dog-eat-dog, ego-centric world of politics.

In a social view, power resides in the people. If people choose not to obey elected officials, they no longer have power. In this worldview, strategies for influencing who has a voice and how resources are distributed become much more varied and creative. Mark and Paul Engler, in “This is an Uprising”, use the example of the legalization of same-sex marriage as an example of how one historic event can be told in two very different ways: in a monolithic view, legalization was won by a few heroes in high court. In a social view, legalization was won over decades by broad-base movement-building across myriad sectors (lawyers, parents, youth, other countries, etc.). Depending on how you tell the story, what strategies are ‘effective’ in achieving social change are radically different.

Even though strategies of social resistance—whether a protest or experimenting with community policing alternatives—are much more difficult to track and measure, it is critical that organizations that dabble ‘outside the system’ are supported.

Movement-Building & Direct Services
Take a moment to think of a NGO you have worked for, followed, or supported in some way. What tactics did they use to achieve their mission? Did they provide tangible services to people in need? Did they engage in long-term advocacy, leadership development, or political education?

Movement-building organizations are those that are building towards a common goal. Black Lives Matter is building a movement to end police brutality towards Black people and fight anti-Black racism. Movements are often oriented around achieving long-term change, are proactive, and require nurturing a shift in consciousness among those most impacted by the problem.

Movement-building organizations often use community organizing as the tool for mobilizing towards a common goal. Yet ‘organizing’ can be pretty mysterious to those that haven’t engaged in it. These stories aren’t told in popular media. They aren’t taught in schools. Perhaps the Civil Rights movement comes to mind, but asking a bystander what an organizer does day-to-day and how beating the pavement leads to systemic change will likely lead to some head scratching (or even the evil eye, given the history of red baiting in this country towards community organizers…remember the hate Obama got for listing ‘community organizer’ on his resume?).

Organizing involves coordinating the efforts of local residents to campaign for and promote the interests of their community. Organizing does not just translate into reformed policies or new services, it leads to a fundamental shift in how individuals and a collective see themselves and their agency in transforming their own lives. In the words of the Executive Director of one of Blue Heart’s partners, Lara Kiswani: “Organizing isn't always the sexiest thing and it's not what funders want to support or what the media pays attention to. But it is what builds power in the community. Organizing is about developing people’s leadership and building the power of folks who have a stake in the work.”

Social change occurs when narratives are shifted. Community organizing shifts the narrative. Organizers are vastly under-resourced, because of the incentive system of traditional philanthropy.

Both of direct service and movement-building organizations, and everything in between, are critical in responding to the scale and scope of the social and environmental problems on deck. However, a healthy ecosystem of change makers deploys resources towards those without roof, meal, or livelihood at the same time as considering the underlying root causes, and experimenting with alternative economic and social systems that can eventually displace the structures that are impoverishing and dehumanizing those in need in the first place. Often, the most resourced organizations are those that have the flashiest and most impressive metrics, which correspond with meals served and beds provided, rather than the more qualitative outcomes of neighborhood relationships nurtured or people emboldened by a microphone.

When considering where and how to give, it is important to resource not just those that serve people in need now, but also those that are tackling the underlying drivers of systemic injustice in the first place. 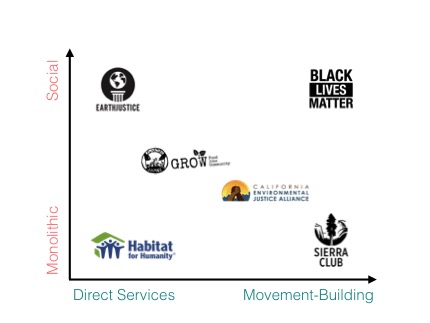 Let’s use some examples
I include four well-known entities that demonstrate these categorizations. Because these are large organizations, they dabble across the lines. EarthJustice provides legal services to folks that have protested against corporations and the state conducting business-as-usual destruction on the environment. Black Lives Matter uses base-building tactics to change public narratives around anti-Black racism. Habitat for Humanity provides homes to those that cannot afford them. The Sierra Club is a membership-based organization which lobbies government and supports policy solutions to environmental problems. Less familiar organizations that help elucidate these spectrums are Planting Justice, which employs formerly incarcerated folks to build gardens and provide affordable, nutritious food to low-income communities. They are working to build an above-ground railroad out of prisons, creating alternative systems for food justice in the process. The California Environmental Justice Alliance advances policy solutions on the state level while working diligently within local communities most impacted by pollution to craft their policy objectives.

Why is this helpful?
Often people give willy nilly. Who did you hear about on the radio? What charity did a friend cajole (or guilt-trip) you into giving to—especially since she gave to yours? Taking a moment to reflect on your own worldview, and how this might fit with the strategies and vision of organizations you might support, can go a long way in baking in some thoughtful strategy to your philanthropy.

Second, these axes are spectrums. Building more institutional partnerships with those working both within and without of power structures is needed, especially in our current political climate. To defend, protect, resist, yet also build under Trump, we must embrace unlikely collaborations between those following the rules and those ditching them.

And third, movement-building organizations or those that use strategies supporting a social view of power are chronically under-supported. To nurture a healthy ecosystem of organizations providing help to those in need while also experimenting with alternatives to our existing social and economic systems (the very ones that are perpetuating poverty, environmental destruction, and racism), is an imperative. You can be part of creating those alternatives. And then you can spread the word! For recommendations on movement-building organizations in the Bay Area you can support, check out the partner organizations Blue Heart funds.

1 For more, read The Revolution Will Not Be Funded, by INCITE!
2 The ruling class here includes corporations, foundation, and high-net-worth individuals, which make up approximately on third of individual giving.