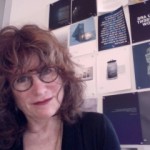 A Catalog of Extinct Experience collaborator Chris Desser has recently designed and fabricated an “asana”, which means “seat” in Sanskrit.  Asana also translates as the position one sits in.  Chris was asked to contribute her asana to a yearlong outdoor exhibition called “Seat,” at Fort Mason in San Francisco.  It has been well received and is enjoying much use.