The climate change issue has followed a trend that has resulted in an increased attention on the importance of cultural values, sacred ancestors, protection and preservation of customs and cosmology, passed through the centuries.

The decision to focus the concept of the Tribal Changes App on people, and not only to explain the science of climate change, was inspired by the emotional and intense speeches that were delivered at the 2013 IPCC on the opening of the UN Climate Summit in Warsaw about the urgent need for attention to be given especially to people in vulnerable situations.

We believe in the constant creation of new cosmological visions in search of harmony with the values, culture, and spirituality of each ancestral community; and what this might mean as a rich contribution to the cultural diversity of people surviving to the limits of urban societies in the face of climate changes.

Tribal Changes is an Art App of creative collaboration highlighting but a few of the many regions and peoples that could be mentioned. Our method is to try to start mapping types of damage caused by climate change, and about the kind of impact it has on cultural norms and customs. The proposal is primarily to start the mapping process in the app, demonstrating the problem is an issue that affects everyone globally, with a focus on the "first peoples," which includes aboriginal, indigenous and native peoples.

We had the opportunity to apply for a 2014 Invoking the Pause grant to produce the Tribal Changes App project under the creative direction of Erica Paiva. Erica invited her sister Elaine Paiva, as Public Relations consultant and Omar Pavel, a professional App developer expert with experience on more than 40 app projects achieved.

Marin Link serves as Tribal Changes' fiscal sponsor.  It is with happiness and joy that we celebrate the support of Marin Link, alongside with Invoking the Pause, which will make our inspiration come true. We share the passion and hope for a human world more connected with Nature and the values of respect and life's preservation to all beings on this planet. We want to participate in the collaborative collective movement in creating an ethical need of our time, contributing through art. 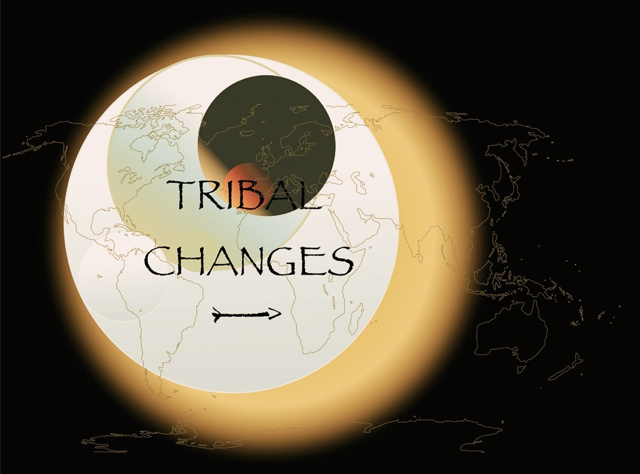 Erica is a fine artist and received her bachelor's in visual arts from the Fundacao Armando Alvares Penteado (FAAP), in Sao Paulo, Brazil.  Since 2009, Erica's interest has been on digital collaborative arts and interactivity on web. She has worked on cultural and educative projects on digital media.

Elaine Paiva is in Public Relations and has experience with social communications. She has worked in Institutional Relations for a Brazilian TV channel and has lived in New York for seven years working with social media and the internet. Nowadays, she directs and produces an independent web channel program www.programaguide.com.br.

Omar Jardim Gaudio Pavel was born in Portugal. He was raised in Milan, Italy where he studied computer science at the Universita Statale de Milano. Omar grew-up with an intense interest in technology, influenced by his father, Andreas Pavel, the inventor of the Walkman. In 2006, Omar moved to Sao Paulo, Brazil where he completed a master's degree at the USP. From there he worked for a year at E-Deploy, a pioneer in developing Apple iOS apps in Brazil. He then was invited to work at iAi, the Institute of Interactive Arts where he was a professor of mobile software development, and a senior developer, where he personally worked on various important mobile, web and desktop projects during his five years there. In 2010 he launched his own company,www.interactivemediadream.com.

Background: The Creative Journey of Expand Game, 2013  The first step of this creative journey began with a small team led by anthropologist and international relations expert Joshua Fouts. While Visiting the Amazon Rainforest in 2012, he reported and met with members of an indigenous community, to talk about the difficulties of maintaining cultural customs while facing impacts of climate change in their region.

After completing this project, Fouts began the search for a team of artists, designers and developers for the creation of an app. Joshua met visual and fine artist Erica Paiva in 2012, and invited her to direct the app creation. During the year, over many conversations and meeting with experts, political issues were noted, among others. It was decided to expand the vision of the concept creation to look at other global communities. Adding to this, an educational project on the fundamentals of science, and History of the Planet, for the children. See The Climate of Change, And Expand Game an educational App

Erica Paiva has worked on project development about the educative game for children, for IPAD, called Expand, in 2013, along with the ITP grant support, in collaboration and continuing Joshua's work. In October, 2013, we have prepared a demonstration prototype game installed on an iPad. The app illustrates five historical phases in the respective climatic history of the planet and has space for 5 short games on basic concepts of science: 1. Formation of the atmospheres of Earth. 2. The game of algae about the process of photosynthesis. 3. The game of Pollution. 4. The game of trees (deforestation). 5. BioCity. The Game of Trees was active in the demonstration app: 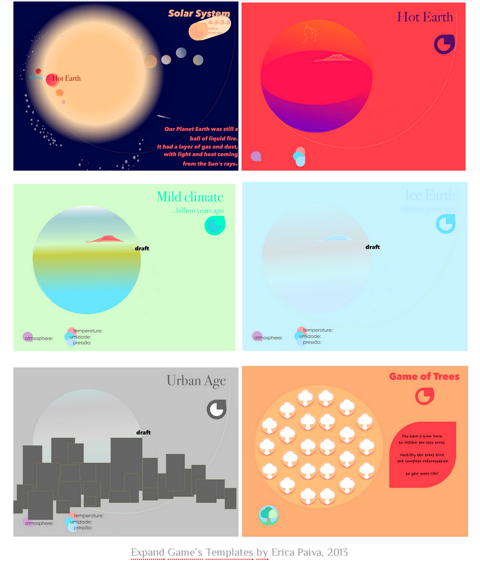 We also made some important discoveries about the Expand Game's creative process. By studying the past, we learned that human beings throughout their existence on the planet have always faced and overcome challenges in their lives.

Different from the focus on science education that we chose with the Expand Game, in 2013, the Tribal Changes App Project, focuses on the mapping of different types of impacts of climate change on the customs and culture of different people in vulnerable situations. The project has been enriched with spiritual and metaphysical insights when thinking about the diversity of cosmologies and understanding of Time, in several communities around the world.